Doug Galloway just sent us this recent photo of him celebrating his wife’s birthday at the Musso & Frank restaurant in Hollywood. Doug has changed his e-mail address, which is why we couldn’t include him in the year-end roundup. 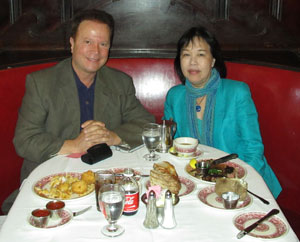 Heading into the Yuletide season, we figured it would be nice to touch base with the muggs all over the world. A good many have responded (some only after a bit of nudging) and we here post their replies, in the order that they were received.

We wish one and all Happy Holidays and especially good health in the coming year.

Following are some of the tidbits we have culled from various muggs over the past few days:

Mark Adams now writing for Screen International in London… Deborah Young just finished her fourth stint as director of the Taormina Film Festival in southern Italy. She’s also still writing reviews for The Hollywood Reporter… Sandy Campomanes has shifted to a job with a new mag, Interior Design… John Dempsey ankled Variety about two years ago after umpteen years on the sheet, but we have no info where to locate him now… Todd McCarthy is now writing for the Indie Wire website, a film industry and filmmaker resource for independent and documentary film news, film festivals and awards. He’s no longer connected to Variety… David Stratton was recently a member of the Grand Jury at the Karlovy Vary film festival. “It was good to relax with an undemanding program in summer weather plus lots of delicious Czech food,” he writes us. David may be coming through Madrid at the end of August.

Ted Clark still living in his idyllic village on the French Riviera. He writes us that his only activity, other than keeping the village bistros in profit, is on the committee of an association that a few years back established a medicalised bi-lingual retirement home for the numerous foreigners who live in the south of France and for local French oldies who fancy an international atmosphere…

Jim Robbins checked in and said he’s no longer with “Fed”, whatever company that was… Liz Guider has been editor of The Hollywood Reporter for three years, and sez it’s been “interesting, fun, challenging, exhausting, and humbling”. She attended Cannes last May, and caught glimpses of some of the former muggs… Liz writes that Jack Loftus retired from Nielsen about three years ago, but no one seems to know his present whereabouts… Jay Blickstein touched base with us; he is now managing editor of Broadcasting & Cable… Pat Watkins is moving house next month, but plans to remain in Birchington, the charming English seaside village where she lived so many years with Roger. 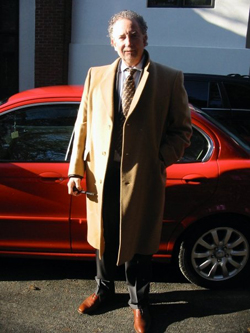 “Old Variety” mugs, those who worked for Variety / Daily Variety prior to the 1988 sale and to whom this website is dedicated, usually don’t turn up as film festival heads.
END_OF_DOCUMENT_TOKEN_TO_BE_REPLACED

After many years of research, Peter has finally managed to get out his new book about Madrid’s oldtime inns. The new tome is monickered “A History and Anecdotes of the Inns of Old Madrid“, and is now on sale in major outsets in Spain, including major bookshops and department stores.
END_OF_DOCUMENT_TOKEN_TO_BE_REPLACED