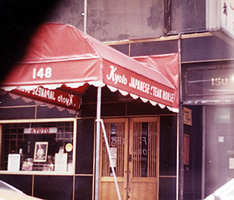 Kyoto was a VARIETY watering hole, a second office for some staffers. Otherwise, it was one of the first Japanese steak houses and purveyors of sushi and sashimi in the NY midtown area (before it became a trend). The likes of Murray, Mort, Abie, Jimmy, George, Roso and others frequently drank there. Calls were forwarded to the bar when Syd was looking for any one of the drinkers.