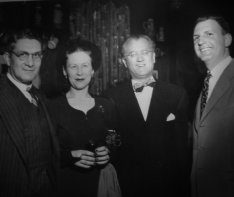 Herman and Florence Lowe with Abel Green and Herb Golden

Herman and Florence Lowe (left) with Abel Green and Herb Golden in New York. Herb says, “A lot of the newer staffers obviously won’t recognise the Lowe’s. They were a husband-wife team who were the Washington correspondents for VARIETY for more than 25 years. They did a helluva job – especially for the bupkus pay they were getting from the infamously frugal management of those days”.
The Lowe team operated from about 1935 until 1960. Herman died in 1961 and Florence died in 2002 at the age of 93. The New York Times carried her obit.