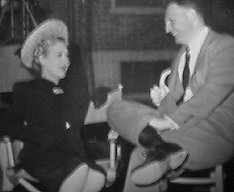 TALKING TO A TOPPER

Herb Golden in 1950 interviewing Mary Pickford. The conversation was all about business, unlike the lay Press which focused on glamor. Pickford and Chaplin were the co-owners of United Artists (and didn’t speak to each other!). Not long after this pic was taken, Pickford sold her half to Bob Benjamin and Arthur Krim and in 1951 the new UA was born. About a year later Krim and Benjamin bought Chaplin’s interest.