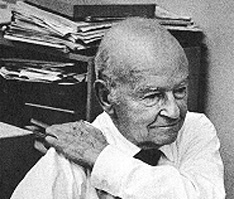 A nice old gentleman and an interesting man. He was born in Germany and Herman’s father, smelling a war, decided to emigrate in about 1905. You guessed it, later when the Yanks came into WWI in 1917, Herman ended up in France with the U.S. Army! Hope he didn’t plug one of his Teutonic relatives. He covered the radio-TV ad front for the N.Y. paper and had lotsa friends at all the networks.
Spitting image of Prez Eisenhower, by the way. Same genes maybe, since Ike’s ancestors came over from der old country, as well. Strange, in a way, the two most important leaders in the field during WWII were German Americans, Ike and Nimitz. – Mort