He was three months shy of his 82d birthday.

END_OF_DOCUMENT_TOKEN_TO_BE_REPLACED

Former Variety bureau chief in Sydney, Blake Murdoch, passed away last Tuesday, December 8 in Sydney, aged 58, after a lengthy illness. Blake joined weekly Variety in 1984 and later became the Aussie and Australasian Bureau Chief of the paper.  He ankled Variety in 1993.

END_OF_DOCUMENT_TOKEN_TO_BE_REPLACED

Simesite has learned of the passing of former longtime Daily Variety mugg Morrie Gelman last Wednesday (Aug. 26) in Palm Desert, California. He died of heart failure at age 90 with his family at his side.

END_OF_DOCUMENT_TOKEN_TO_BE_REPLACED

By Frank Segers with Robert Marich

NOV. 12, 2018–Larry Michie–television editor of weekly Variety from 1973 until 1980 where he was part of a triumvirate of legendary TV editors at the trade newspaper–died Wed. Nov. 7 at an assisted living facility in Hadley, Mass.

END_OF_DOCUMENT_TOKEN_TO_BE_REPLACED 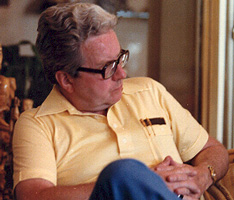 Thanks to Don Groves and Peter Cowie, Simesite has learned of the passing of Bob Hawkins in Rome on October 14, aged 93.

The Hawk (Hawk), as he was familiarly known to those at the old Variety, probably was the longest-working mugg on the paper, spanning his activities as stringer, bureau chief in London, International Editor in New York and finally Rome assistant between 1948 and 1998, a half century of involvement with the sheet.

Over the many years, Hawkins’ fortunes in Variety soared and plummeted. His titles changed, meaningful or meaningless, as he snaked through a speckled, variegated career. For a while he was Number 2 man of Syd Silverman, then for a while superannuated outcast with a desk in the 46th Street ground floor sales department, though remaining on the masthead with a title. Under the Cahners regime he was fretfully buffeted from fair-haired senior statesman under one management to scorned supernumerary under another, ending finally in virtual exile in what for several years became the vestige of the Rome office, a room, off a courtyard, in an apartment building near the Tiber. He nonetheless maintained the honorary title of “Director of International Development” even after that vestigal office of what had been the mighty Variety presence in Rome under Hank Werba was closed in December 1997.

Born in Genoa of American parents (his father was the Director of Standard Oil in Italy) and educated in a German school in Switzerland, Hawkins attended Princeton (a fact that at first endeared him to Syd Silverman, another ex-alumnus) and did a stint in the Intelligence Service of the Army during the war interrogating German POW’s. Later, he returned to Princeton for two years under the G. I. Bill.

In his youthful years, the Hawk would write up two reviews for himself, one in the style of the New York Times and the other in that of Variety. He’d then check them against those published by the critics.

During an interview in Rome made in preparation for my book Inside Variety (Madrid: Ars Millenii, 2000) Hawkins recalled: “My parents had gone to Venice for the Excelsior Hotel where the film festival was sort of born. I had gone as a kid before the War and seen it in a kind of different perspective. Then in 1948 I went back to see the films – because I either wanted to see films, or make them, or write about them. It was the year that Elsa Maxwell attended. She was writing stories for Abel Green and she wrote that an Orson Welles film – I think it was Macbeth – was a big hit, there was applause and so forth. I was there. And it wasn’t a hit. It was whistled (boo’ed). So I wrote to Abel. ‘I don’t think this sort of reporting is something that Variety wants, distorted reporting.’ Abel said, ‘Well, why don’t you send me some stuff? You seem to know the field, kid.’ I had moved back to Italy, staying in Genoa, living with my parents, going to Rome from time to time to see film people and going to events like Venice and Cannes. I used to ride down on my Vespa scooter.

“Abel said he had another correspondent. Someone called Raul Quattrocchi and a woman called Helen Tubbs, but I started writing the serious stuff. I was paid on a string basis. First five dollars a column, then six… Finally, in 1954,  they paid me a retainer and I moved to Rome to set up a Variety office there. I sublet an office from a talent agency. So I was reviewing films, doing stories. At that time we did more legit than now. We covered the Italian musical comedies. But the emphasis was mainly films and covering film festivals, which meant Cannes, Venice, Locarno, later San Sebastian.”

Throughout that time Hawkins had been doubling as a freelance photographer, taking pictures of stars and celebrities at the film festivals he attended and in Rome (see Hawkeye). Some of his pictures appeared in publications such as the New York Times, Paris-Match, Picture Post, Illustrated and in Britain’s Sunday Express and Daily Express. He was also contributing freelance articles to The New York Times and for a while wrote a monthly “Letter from Rome” about the arts.

Then in 1966 Hawkins moved to London as European Manager, while Hank Werba took over the Rome office, having moved there from Madrid where he had been filing for Variety while at the same time, thanks to a special arrangement with Syd Silverman, also working as publicist for the American producer Samuel Bronston, who at that time was making a series of blockbuster films in and around Madrid.

It was at Christmastime in 1969 that I first met Bob in the New York office, where I was applying for a job as Madrid correspondent. It was a Sunday and only Bob and Syd were in the office. After a short interview, I was accepted on a trial basis as a stringer. In February of the following year, the Hawk came to Madrid to make the rounds of the Spanish companies with me in preparation for the big Cannes issue that year. We spent four or five days visiting clients, followed by another two or three in Barcelona, during which time, from morning until night, Bob primed me on anything and everything concerning Variety, which he revered and which was his life, as it was to so many others on the old Variety. Who was who in New York, how best to file my copy, where to look for stories, what film festivals and film markets were important, how best to approach potential customers. Every now and then he did touch upon some cultural subject, and I was duly impressed by the wealth and scope of his knowledge and his linguistic abilities, which included fluent Spanish. As the itinerant representative of the paper, he seemed to me the perfect diplomat: suave, convincing, distinguished. However, one day I did see his “Latin” side erupt. It was when, upon leaving the office of some customer in Madrid we came to the elevator and it turned out to be out of order. This was too much, and suddenly the Hawk let loose a tantrum of abuse against all things Spanish.

That year he joined me at the San Sebastian Film Festival and showed me the ropes. He seemed to be on familiar terms with all the key film industry reps, both Spanish and international, including the top executives of government organizations and the MPEA. His love of films was not feigned. And I remember him telling me one evening, after we had seen a real stinker in competition, that he loved “film” per se, in other words, the medium of film, even the bad pictures.

Then, in 1976,  Hawk was brought over to New York by Syd as International Editor to join Silverman and Bob Landry and joined them on the “poop deck” on 46th Street. The idea was to bolster the managerial structure in response to the burgeoning scene abroad. Chosen to replace him as bureau chief in Blighty was Roger Watkins, who within a short time boosted sales and improved morale in the office on St James’s Street.

Bob, a highly sophisticated and cultured man, but sometimes given to a streak of Italian petulance, spoke five or six languages. His trademarks were meticulousness and attention to detail, which critics saw as petty nitpicking. The quip in the old brownstone at that time ran: “Why was Bob brought over to the New York office?” Answer: “So he could go to lunch every day with Syd.” In fact, Hawkins helped edit incoming copy while attempting to impose some sort of method and structure to the largely disparate activities in the paper and rein in the freewheeling but usually successful activities of the  “hybrid” mavericks abroad. For a while the Hawk sat on the editorial dais on 46th Street with Syd and Frank Meyer, who had been made managing editor in 1983 after Bob Landry’s retirement. When Mark Silverman was moved up to the dais, Bob was ignominiously moved down to a desk in the back of the advertising department on the ground floor.

After the sale of the paper in 1987 and the move of its offices to Park Avenue South under the new Cahners’ regime, Hawkins’s services were eventually dispensed with in New York and he moved back to Rome in 1990. When Hank Werba died in 1992 and the Rome office was shuttered, Hawkins took over the remains of the paper’s activities there, handling matters such as circulation and subscriptions.

In 1995 Hawkins co-authored, with David Rooney, Italian Cinema: from the Golden Years to the 1990’s, published by Variety, which included several of his much-prized photos of personalities such as Ingrid Bergman, Vittorio De Sica and Alberto Sordi.

The Hawk is survived by his wife, Rosella, and three children, Christie, Carolyn and Frederick.

The following was submitted by the Hawk for inclusion in the Souvenir Album published in 2005 on the occasion of Variety’s 100th Anniversary celebration in Sardi’s restaurant in New York:

“I opened Variety’s first Italian office, in Rome, in 1954. ‘Opened’ is sort of an exaggeration. Actually, I rented a tiny, windowless room in the larger offices – right off Via Veneto, in Via Sardegna – of an enterprising young American actor/agent, Chris Hofer, who had graduated from minor roles in local films to finding similar roles for other hungry Yanks in search of similar spots.

“Chris allowed me to run a (probably illegal –but what wasn’t in those days?) phone line from his switchboard, and, with desk and chair, I was in business. As in those days almost every film activity revolved around Via Veneto, the Excelsior Hotel, the Café de Paris and Doney, plus the nearby restaurants, the location, if not the setup itself, was ideal.

“Variety, which first got to postwar Rome as a promo giveaway for prominent Hollywood mogul guests of the Excelsior, soon attracted attention – and sales – in the key newsstand across the street from the hotel.

“When Chris died tragically in a car crash, I moved to another rented single room across the street, this one with a window and an elevator which in those days still needed a coin to operate. But I now had my own phone.

“When I moved to London in 1966, Hank Werba took over from me in Rome and picked, yes, another single room office but with a better view and more sunshine. The only drawback: when he or a guest needed to wash up, he had to knock on his landlady’s door, right behind his desk, and having brushed his shoes, tiptoe carefully and silently across the highly polished floors of her living room to her bath…but that’s another story.”