By Frank Segers with Robert Marich

NOV. 12, 2018–Larry Michie–television editor of weekly Variety from 1973 until 1980 where he was part of a triumvirate of legendary TV editors at the trade newspaper–died Wed. Nov. 7 at an assisted living facility in Hadley, Mass.

Michie was 77, and had been suffering from Alzheimers Disease. He is survived by his wife of 56-years, Virginia, with whom he pursued newspaper ventures in Massachusetts after leaving Variety.

New York-based Michie was the third in a triumvirate of Variety tv editors who wielded great influence in their era at the broadcast TV networks, local tv stations and in the burgeoning TV syndication market, when Variety was often the principal source of information about the inside workings of the industry. It was an era when the three terrestrial networks dominated the airwaves and cable TV was in its infancy.

Michie succeeded Les Brown as Variety tv editor, who in 1965 had succeeded the widely-admired George Rosen. (Brown left for a distinguished career at the New York Times.)

Following his departure from Variety, Michie and his wife bought and operated a western Massachusetts weekly, the Shelburne Falls & West County News for a decade starting in the mid 1980s. It was there that the Michies hired a fledgling reporter named Matt Silverman, the youngest son of Variety publisher Syd Silverman, who later became a successful author of books about sports.

Also during this period, Michie, on a freelance basis, editorially organized and wrote for myriad Variety special sections covering foreign show biz. The assignments took him all over the world, from Europe to the Middle East to Japan, Korea and China.

In the early 1990s, Michie and his wife moved to Martha’s Vineyard, Mass where he was news editor of The Vineyard Gazette and editor of Vineyard Magazine.

Born in Chicago, Michie was raised by a pair of aunts in Racine, Wisconsin.  He attended Valparaiso Univ. in Valparaiso, Ind. where he met his wife, Virginia, who survives him.

His earliest inroads into trade journalism took place in Washington, D.C., where Michie was a reporter at the trade journal then known as Broadcasting Magazine. He was subsequently hired by Liz and Les Carpenter, who had close ties to the Lyndon Johnson administration and provided news coverage for many Texas newspapers as well as Variety. By the late 1960s, Michie was covering Washington developments for Variety exclusively.

Summing up his career at Variety, “I was 25 years old, and I was covering world events…going to press conferences at the White House…and the Supreme Court to get the latest decisions,” Michie told Peter Besas, author of the book Inside Variety.  “I was also reviewing plays premiering at the National Theater before going to Broadway and all of the Kennedy Center opening dedications and performances.  It was a great time to be in D.C.”

Michie in his later years was also a novelist. His 2013 science fiction novel, Chasers, is about a futuristic Russian invasion of western Massachusetts, and his novel, The Wars of Warren Temple, follows a weary Union officer making his way to Texas to fulfill a promise to a dying Confederate officer. 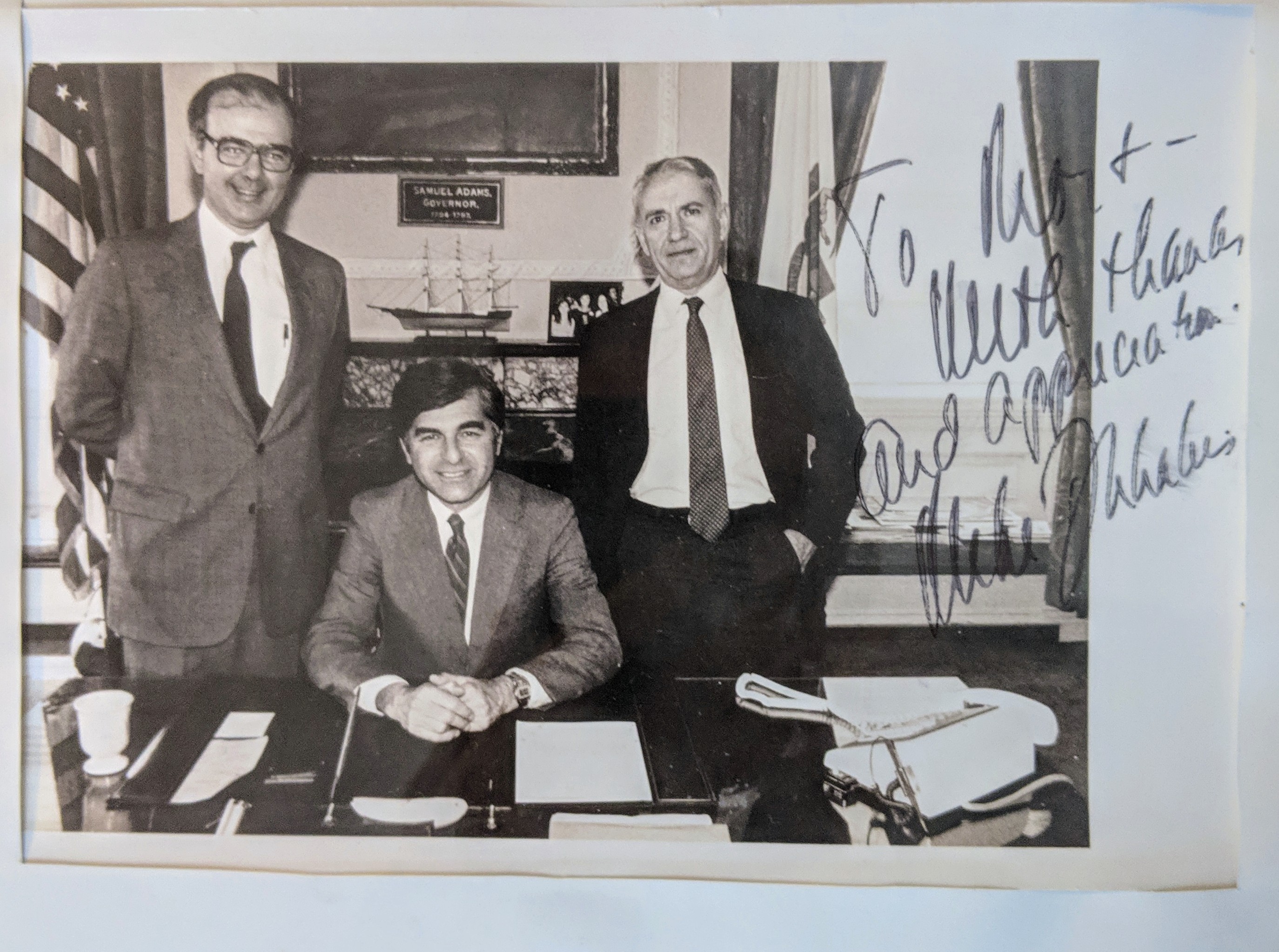 Larry with Mort Bryer and former two-time governor of Massachusetts, Michael Dukakis, who ran for president of the United States in 1988.

The following obit, written by Larry Michie’s wife, Virginia, was just received by us. It goes into some touching details not covered by the previous obits and so we have posted it on Simesite.

Laurence Bruce Eaton Michie, 77, died peacefully November 7 after a long decline from Alzheimer’s disease. He had beat the odds of many life-threatening conditions that, in several instances, also defined his career decisions.

He started beating the odds the day he was born, July 21, 1941, in Chicago. He was born with pyloric stenosis, a certain death sentence in those days, but he became the first baby in Cook County to have the condition surgically repaired by Dr Loyal Davis, who later became better known to the general public as Nancy Reagan’s father.

Larry spent his early years in Missouri and Santa Fe, New Mexico, until moving to Racine, Wisconsin to live with his aunts when his mother became unable to care for him. He graduated from Racine Lutheran High School and subsequently attended Valparaiso University where he met Virginia, his wife of 56 years.

Virginia moved to Washington, DC in 1961 arriving just when the scaffolding from JFK’s inauguration was being dismantled. Larry arrived that summer and hung around so much that it seemed easier to fall in love and get married than not and so they did, marrying in 1962 and living happily after.

Larry found work with Broadcasting magazine, starting as copy boy before becoming a full-time reporter. It was during his first year at Broadcasting, trying to read while drinking a cup of coffee and thereby blocking his right eye, he discovered he couldn’t see out of his left eye. Many tests later showed an aneurysm that rather than growing as a bulge, was growing alongside the optic nerve and was in danger of reaching the crossing point and endangering his vision in the right eye. In a major surgery that sawed open his forehead where his carotid artery was permanently clamped off and an incision in his throat where the artery also was clamped off, the aneurysm could then be drained (or something of the sort) and it worked!! Virginia took the opportunity to quit a job she disliked to stay home and care for him and they took up where they’d left off, living happily ever after.

Larry continued to work for Broadcasting and, after a couple of brief employments, Virginia found her niche in the publications division of the American Chemical Society. Larry moved on to a couple of other publications and then settled at the Carpenter News Bureau owned by Les & Liz Carpenter. Liz was already working for LBJ in the Senate while her husband ran the bureau which provided DC news to a large number of Texas newspapers as well as to Variety.

Larry thrived. He covered the Federal Communications Commission and Capitol Hill and also all aspects of the burgeoning entertainment venues in the DC area in what would become his lifetime affiliation with Variety. His life had its aspects of “another opening, another show” as he, usually accompanied by Virginia, reviewed productions opening at the National Theatre, Arena Stage, Olney Theatre, Wolf Trap Farm and what is now the JFK Performing Arts Center.

It was also, of course, a time of enormous upheaval in the history of the United States. JFK was assassinated, LBJ sworn in, Martin Luther King assassinated, Bobby Kennedy assassinated, rioting in the streets of DC, at the Democratic convention in Chicago, and Larry was there, covering these events not so much as events, but covering how the press was dealing with these events. It was easy for him to work seven days a week and cover entertainment events several evenings a month and love every minute. The Michies were having a grand time living happily ever after.

In late 1973, Les Brown, the television editor of Variety, moved to The New York Times and Syd Silverman, the owner of Variety, asked Larry to come and take his place. It was a bit of a tough decision because Larry loved his job and he and Virginia both loved DC but they’d visited Manhattan a few times and the challenges of a new venue appealed to both of them so off they went.

And it worked. Larry was no longer a one-man-band but the world had been getting smaller since L&V married and faraway places were easier to reach so meetings and conventions and show openings were held in far-flung places and in order to attract press coverage, spouses were usually invited to tag along so Virginia had lots of fun, free trips and lots of midnight drives to find the nearest Western Union office so Larry could file his stories — remember the days of no texting?

They bought a condo on West End Avenue and Virginia spent her free time scraping the ceiling of all its peeling paint beginning her unintentional career of buying “fixer-uppers.” But Virginia also became gainfully employed at Variety when it was discovered that a recently-hired subscription manager, being unable to keep up volume of renewals, had been stuffing them in a drawer at the end of the day and neglecting to do anything with them in the following days, weeks, months. Syd hired Virginia to come in and clean up the mess which took many months but eventually it got fixed and then it was time to get ready for a new automated labeling system. The 3 x 5 index cards that showed the detail for all subscribers were a nightmare of cross-outs for address changes, renewal dates, multi-addresses for those with multi-homes and so Virginia did that for many months and then what to do next? They were still living happily ever after but both of them were kinda bored compared with the life they’d led in DC.

Their next-door neighbors in the condo had a cute cottage in western Massachusetts that they’d allowed L&V to use for several vacations and Virginia had become totally in love with the idea of moving to the country where Larry could write novels and she could do something artistic and they could live happily, happily ever after. So off they went to a house built in the early-1800s that was in great condition (the broker said so) and six years later it really was (almost) in great condition and working on it any longer seemed a bore. So what to do? No, they couldn’t put on a show. But they could buy a newspaper!! The Shelburne Falls & West County News. And thus began another wonderful life.

During the years they owned the newspaper, Larry once again began working for Variety, traveling a couple of times a year with another ex-Variety reporter, Frank Segers, to countries all over the world doing special sections on different countries’ entertainment businesses. They traveled to South Korea for stories on the preparations for the Olympics soon to be held there and went on to China not long before the Tiananmen Square uprisings. In fact, over the years, they traveled to so many places that Virginia uses trying to name the countries instead of counting sheep as a going-to-sleep device.

In 1993, Larry was discovered to have colon cancer which was successfully treated but it seemed prudent to sell the paper and do something less dependent on the Michies’ healthiness.

The job Virginia had been happy to quit back in the DC days had provided one positive element. When she had worked there she become friendly with Jody O’Brien who was dating and then married Dick Reston and they became a foursome for bridge, went to baseball games together, and wished they’d visited Jody and Reston when Dick was a correspondent in Moscow and had visited them in London when Dick was reporting from there. Now Jody and Dick were running the family’s newspaper on Martha’s Vineyard. They suggested that the Michies come and work with them at the Gazette.

It was a good decision to do so because a couple of years later Larry was discovered to have liver cancer. However, as his surgeon gleefully told him, it’s no problem: remember Prometheus! And he also took out Larry’s appendix, just for good measure.

They enjoyed their years at the Gazette but hitting their 60s it seemed a good time to retire which they did in 2000 and moved back to western Massachusetts.

Since then, they moved a few more times (to Alabama for a beautiful view) and five different places here in western Massachusetts; (moving seems to be Virginia’s hobby) and Larry wrote a few more novels (that being Larry’s hobby; two of the novels are available thru Amazon).

And so in the grand scheme of things they did indeed live happily, happily ever after.