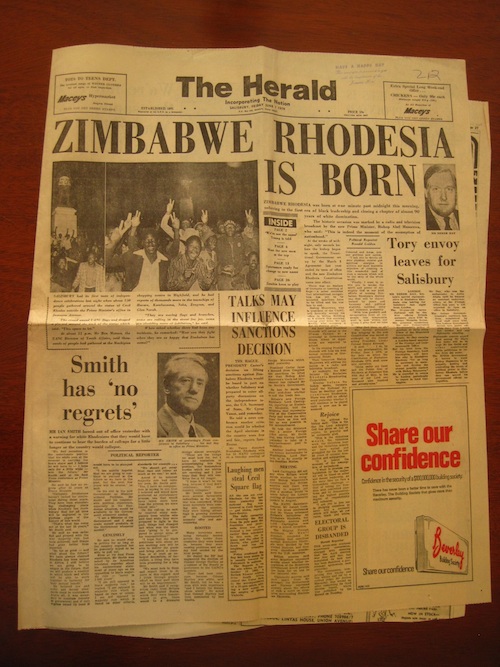 Former Variety sales manager Mort Bryer sent us this amusing contribution of an offbeat sales assignment he undertook in 1979 to darkest Africa. This was during the years when the sheet was expanding prodigiously overseas and special sections were being added zeroing in on areas such as Latin America, Portugal, the Far East, New England, the Magreb, Australia & New Zealand and a dozen other territories around the world.

It all started in Cannes during the film festival and market in 1979 which many of the muggs attended each year, the high spot of our yearly sales push. This was the era when Variety published its International Film Annual which was so big – once hitting 650 pages! – that when it was delivered to our stand in the Carlton Hotel a huge truck had to be rented to load the issues on and bring them to the hotel.

While strolling down the Croisette one day I ran afoul of the producers of a hugely internationally successful South African production called The Gods Must Be Crazy. We got to talking about the film and they filled me in on the burgeoning film industry in their country. At that time during the Apartheid period South Africa was still run by the Afrikaners. Always on the lookout for creating new advertising sections, I checked with Syd about following up the lead and flying down to South Africa to try to drum up some ads for a special section. He gave me the green light to explore the country and before I knew it I was at the Nice airport on my way to Johannesburg, with a stopover in Kinshasa, Democratic Republic of the Congo, where we were kept waiting in the plane while a gnomelike guy sprayed the aircraft, maybe to keep away malaria or yellow fever mosquitos.

Everything went well in Joberg and I did line up a number of ads, enough to make a small advertising section for a future issue, though in New York some of our more PC guys advised Syd against running a South African section. Anyway, while in Joburg it dawned on me that my airline ticket allowed me to zip up to Rhodesia to have a look at Victoria Falls, using as an excuse that I was checking out the showbiz scene in that country which, like South Africa, at that time was run by whites, mainly British.

The next morning I headed out to Jan Smuts Airport. As I waltzed out to the plane, I thought the aircraft looked a bit odd, since it was painted totally gray and had some sort of a strange device under each wing. After boarding, the stewardess made an announcement: “Please pull down your blinds and we have to lower the lights”. Phew, heavens to Betsy, twas then I suddenly remembered that there was some sort of unrest going on in that country, small guerrilla groups fighting the white government of Ian Smith, and more importantly, a couple of Air Rhodesia planes had been shot down via SAMS with all the passengers and crew sent to St. Pete’s Gate. Collar tugging time for Mort.

When we landed at the airport at the capital, Salisbury, I could see it was surrounded by armored cars and barbed wire. Frankly speaking, I got a bit angry at the airline clerk in Joberg who issued me the ticket for not alerting me to what was cooking in Rhodesia. In fact, it turned out that fighting was raging all over the country, including the suburbs of Salisbury. Even though my flop was at the edge of town, one night I heard the thud of either bombs or grenades and the chatter of what I assumed were machine pistols. Odd in a way, since my room was right over a disco which played very loud music.

The next morning I headed over to a film company that had been mentioned to me and entered a very spiffy office, walked over to the receptionist and announced, “I’m Morton Bryer from the New York office of Variety and I’d like to see Mr…….” ( The bossman had a Greek moniker and owned a chain of movie theatres in Rhodesia.) Said receptionist’s answer was, “Oh, you are here to see us about our subscription”. I was tempted to say “Yes, I’ve zipped down all the way from New York just to check on your subscription”. But I was polite and repeated my request to see the director of the company.

As it happened, just by chance, I arrived in Salibury on the evening of May 31, 1979. The next day the country changed names. It became Zimbabwe and the government was taken over mostly by black politicians.

I did manage to get up to Victoria Falls for three days, flopping at the Victoria Falls Hotel, a splendid old line joint that served a magnificent breakfast, English style, and which was within walking distance of the Falls. But to cut to the chase, as far as any business for Variety was concerned, there just wasn’t any in Rhodesia. So it was back to Jan Smuts airport in Joberg and then the 24 hour return flight to dear old New York crammed with rowdy fight fans who had been attending a major boxing match somewhere in South Africa, not the proper crowd, for a Variety gent.

Travel may broaden the mind but it can make a guy a bit nervous, especially if he gets caught up in a revolution.

At the end we did manage to run a small South African section with four or five pages of ads and a bit of editorial.

Alas, that movie chain never did get their issues of Variety. It had something to do with blocked currency. I suspect Variety’s total circulatiion in all of Rhodesia was about two.