After many years of research, Peter has finally managed to get out his new book about Madrid’s oldtime inns. The new tome is monickered “A History and Anecdotes of the Inns of Old Madrid“, and is now on sale in major outsets in Spain, including major bookshops and department stores. 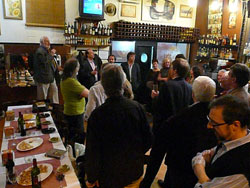 The paperback runs over 400 pages, with over 60 illustrations, some of them taken by Peter’s son, Mark, and includes a long bibliiography, a specially-tailored currency conversation table from the 19th century, a glossary, two appendices, extensive notes, sources and an Index. The book traces the history of Madrid inns from the late 18th century up to the First World War, with most of the descriptions coming from contemporary travellers of the time. The historical background is peppered with anecdotes on the inns and descriptions of restaurants and cafe life of that period.

Since the main sales point of the book is sure to be in Spain, the Madrid publisher, Ediciones La Libreria, simulataneously brought out an edition in Spanish as well, called “Historia y Anecdotas de las Fondas Madrilenas”. 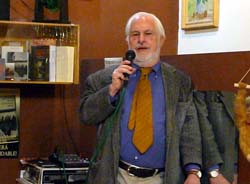 In order to celebrate the occasion (since publishers are loath to pick up the tab for such “extras”), Peter himself hosted a launch cocktail at a local tavern the evening of March 26, inviting friends and acquaintances from various walks of life, ranging from book collectors, to journalists and poker pals. Some of them can be seen in the picture.

Though the book is not on sale outside Spain for the time being, it can be ordered directly from the publisher, whose website is: www.edicioneslalibreria.com.