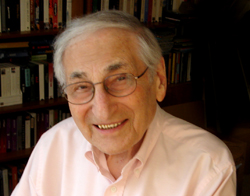 On December 31, Hy Hollinger ended a 36-year trade journalism career, perhaps the longest and most influential in modern-day show biz.

Hy’s first newspaper job was at The New York Times, working on Saturdays during high school as a copy boy and messenger in the classified ad department. (That’s when he got his Social Security card.) While attending Columbia’s Journalism School, Hy landed a job as a CBS intern working the 1940 Republican convention in Philadelphia that nominated Wendell Willkie as a dark horse candidate to oppose Roosevelt. Conventions were strictly radio affairs back then, and Hy found himself rubbing elbows with such CBS stars of the time as Robert Trout, John Charles Daly and political analyst Elmer Davis.

It almost goes without saying that a career of similar duration is simply not possible today given the revolving-door staffing styles currently prevailing at V/DV and at The Hollywood Reporter. (At The Reporter alone, Hy outlasted five editors.)

Other Variety staffers had longer tenure – Bob Hawkins, 55 years; the late John Madden, 38 years; and Morton Bryer, 37 years, for example – but only Hy’s spanned both the Hollywood trade publications, and was so intently focused on covering the mix of international film and Hollywood — particularly the business of selling independent, non-major-studio productions directly to film distributors located in markets all over the world.

What may not be not widely appreciated is how influential Hy was. During his Variety years, he did pioneering work with Don Groves, then working in London, to develop what was a virtual boilerplate for reporting international box office grosses.

The intricate methodology of foreign gross reporting was refined over years, especially during Hy’s years at The Reporter. As a foreign box office analyst, he was without peer. No one did it better.

But Hy’s most extraordinary achievement could be encapsulated in three words – American Film Market. Rarely in Hollywood trade journalism does what a reporter writes about leave a lasting institutional mark. Hy’s work did exactly that.

In the late 1970’s and early 1980’s, Hollywood-based international film sellers flocked to two dominant overseas markets to sell their wares: the commercial sidebar attached to the Cannes International Film Festival and to MIFED, a fall bazaar held annually in Milan, Italy. There was nothing comparable to these key events in the United States.

At Cannes one year – when the weather along the Cote d’Azur was rainy, the lodging and food prices steep, the French particularly rude and the level of discontent high – Hy reported in Variety how grim was the mood among American film sellers. His articles did not go unnoticed.

The superb contributions to this Simesite article include two, from Robert Meyers and Michael Goldman, which pointedly recall the eventual result of Hy’s accurate and descriptive reporting coming out of that wet Cannes market. The seed was planted and the American Film Market was conceptualized.

Hy’s trade journalism career was enriched by his two stints with major Hollywood studios. As a result, he was one of the few trade journalists to know first hand how studios actually worked rather than how they presented themselves to outsiders.

Born – he won’t say when – in the Bronx, Hy attended Townsend Harris High School, the City College of New York and the Columbia School of Journalism. After serving from 1942 to 1945 mostly overseas as a sergeant in Armed Forces Radio, he worked for a suburban Philadelphia weekly, then covered sports for the now-defunct New York Morning Telegraph before joining Warner Bros. as a publicist.

After his first Variety stint, Hy joined Paramount Pictures but this time as an executive. First he was publicity director of International Telemeter Co., an experimental pay tv operation. He later became European Production Publicity Director based in London, then ad-pub v.p. It was a heady time for Hy.

He recalls working in London in the “swinging Sixties,” and visiting locations in France, Germany, Italy, Spain, Sweden Israel, Lebanon, Russia, (the then) Yugoslavia and Czechoslovakia. Hy also recalls with some amusement that Robert Rehme, the veteran film company exec (Avco Embassy, New World, Universal) and producer (Neufeld/Rehme Productions) once told him that he (Hy) was Rehme’s boss.

Also during his Paramount period, Hy found himself described in a book by writer-director Nicholas Meyer (“Star Trek,” “The Seven Percent Solution”). Hy had assigned Meyer as the unit publicist for the 1969 production of the three-hanky weeper, “Love Story,” with Ryan O’Neal and Ali MacGraw. Meyer turned his experience into “The Love Story Story,” published in 1971, in which a very Hy-like character is warmly praised as being “avuncular.” (Hy says he recalls Meyer as a “young publicity writer who cornered visiting producers to show them his scripts.”)

In a regime change at the studio, Hy left Paramount and worked for a time beginning in 1972 in corporate public relations, handling a broad range of accounts from the National Basketball Players Assn. to Sagittarius Productions, owned by Seagram chief Edgar Bronfman, responsible for producer David Puttnam’s first film, “Bugsy Malone” (1976).

As Hy remember it, he was walking down a street in mid-town Manhattan one day when he had a chance encounter with his former Variety boss Syd Silverman and Variety exec Robert Hawkins. The ensuing conversation among the three culminated not long after in a headline above an article in the Sept. 5, 1979 edition of the Weekly – “Hy Hollinger Rejoins Variety As Assoc. Ed. Basing in Hollywood.” His brief: “All aspects of show business with special emphasis on the international scene.”

The assignment was not taken lightly by management at a time when the weekly Variety in New York and the Daily Variety in Holywood, although under the same ownership umbrella, operated pretty much as separate entities. The 1979 article notes that Hy’s new assignment “marks the first time in many years that weekly Variety will have its own editorial presence in the film capital.” In any case, Hy spent the rest of his career in Hollywood.

In introducing this article, I’ve tried to keep to “just the facts, ma’am” in order to stay out of the way and not detract from the extraordinary contributions that follow from a selection of those who worked with Hy over many years.

The contributions shed light on various aspects of Hy’s career. What strikes me is how unexpectedly emotional they are.

As one who has worked under Hy’s close tutelage covering international film grosses for The Hollywood Reporter, I welcome the emotion. Hy patiently shared with me – as he did with many others throughout his career — his considerable trade smarts, his intelligence, wisdom and philosophical outlook (“Evil triumphs, but never conquers”). And, most especially, his understated wit.

Hy exited trade journalism in typical Hollinger style – quietly, gracefully and with a minimum of fanfare. There was a small post-departure luncheon party of THR staffers, an event Hy thoroughly enjoyed. Many consider Hy a cherished friend. Count me in!

Please enjoy the following contributions. My special thanks to each author.